The Republic of Artsakh is a sovereign, democratic, legal, social state, where power belongs to the people. The system of state power in the Republic is based on the separation and balance of the legislative, executive and judicial powers, as well as on the principles of the distribution of the powers between republican and local authorities.

The President of the Republic follows the constitution, ensures the normal functioning of the legislative, executive and judicial authorities.

The President represents the Republic in international relations, implements the overall leadership of the foreign policy.

The President forms the National Security and presides it.

The Head of State solves issues related to RA citizenship and political asylum.

He awards orders and medals of the RA, grants highest military and honorary titles, highest diplomatic and other degrees.

The supreme body of the legislative power of the Republic of Artsakh is the National Assembly elected for a five-year term. 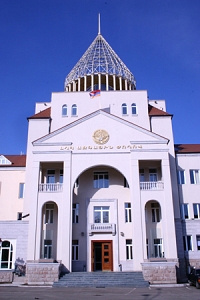 When administering justice, the judge is independent and operates only in accordance with the Constitution and laws. The courts in the Republic of Artsakh are independent. The RA judges are appointed for life and hold office until the age of 65. Powers of a judge are suspended only by the Constitution and in the cases provided by the law.

The judicial system of the RA consists of:

The Supreme Court is the highest judicial body of the Republic of Artsakh. It implements constitutional justice, ensuring the supremacy of the Constitution.